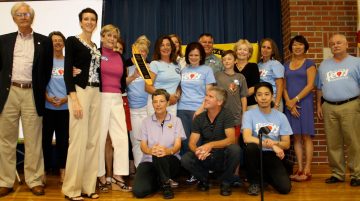 Jacksonville Beach, FL (April 18, 2012) – The St. Johns River Ferry Task Force has been chosen by the Board of Directors of Beaches Watch, Inc. as the recipient of the 2012 Friend of the Beaches Award.  The award will be presented at the Beaches Watch monthly meeting on May 2 at 7pm in the Fletcher Middle School Cafeteria, 2000 3rd St. N., Jacksonville Beach.  The public is invited to attend.

Nominator Ed Raube stated in his nomination, “considering the short amount of time that the St Johns River Ferry Task Force has been formed, their task has been daunting. However they have brought the beaches and surrounding communities together to save the St. Johns River Ferry service. This effort is a grassroots combination of citizens, businesses, organizations, and elected officials, all working tirelessly to save the ferry service. This type of effort needs to recognized and lauded.”

“Beaches Watch is proud to recognize the St. Johns River Ferry Task Force as the 2012 recipient of the Friend of the Beaches Award for their exemplary work to keep the St. Johns River Ferry service operational, a service that enriches the quality of life for Northeast Florida residents, area businesses and visitors and a critical link in the historical A1A highway”, said Beaches Watch President Sandy Golding.

Beaches Watch presents the Friend of the Beaches award to individuals, businesses or organizations that make exemplary contributions to the quality of life at the beaches.  Previous recipients have been Pete Modica, Mary Emerson-Smith, Bennie Furlong, Marcy Silkebaken, the River Branch Foundation, and Gretchen Ferrell and the Beaches Local Food Network.