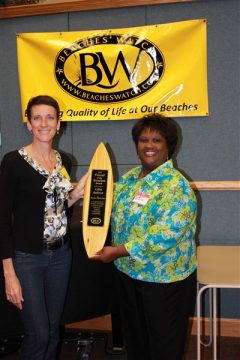 Jacksonville Beach, FL (June 5, 2013) – Lillie Sullivan has been chosen by the Board of Directors of Beaches Watch, Inc. as the recipient of the 2013 Friend of the Beaches Award.  The award was presented at the Beaches Watch monthly meeting on June 5 at 7pm in the Beaches Branch Library Community Room, 600 3rd St., Neptune Beach.  The public is invited to attend.

Lillie Sullivan is being recognized for her exemplary contributions to enrich the quality of life at the beaches through her efforts to preserve beaches African-American history and help beaches elementary school children.  The Rhoda L. Martin Cultural Heritage Center building, now located at the corner of 4th St. South and 4th Ave. South in Jacksonville Beach, was the very first school house built in 1939 to serve the African-American community at the Beaches, stretching from Mayport to Palm Valley.  This 4-room school house was in active use until 1999 when the building was saved from the wrecking ball and moved to its current location.  As the President of the Jacksonville Beach Elementary Preservation Fund, Ms. Sullivan led the effort to raise funds, obtain grants and develop plans to restore the schoolhouse to its original condition as well as add an annex for offices and restrooms.  Since the restoration of the schoolhouse, an “after school” program was developed that has served elementary school students for the past seven years, allowing students to gain skills that improve their learning and performance in their regular classrooms.  The program has been described by several elementary school principals as the “most effective and productive” in the community.  In addition to the after school program, the Rhoda L. Martin Cultural Heritage Center has hosted many special art and history exhibits focusing on the historical African-American experience at the Beaches and has hosted health fairs, music celebrations, Women’s History Month programs and anniversary events.

“Beaches Watch is proud to recognize Lillie Sullivan as the 2013 recipient of the Friend of the Beaches Award for her exemplary contributions to enrich the quality of life at the beaches through her efforts to preserve beaches African-American history and help beaches elementary school children,” said Beaches Watch President Sandy Golding.