Founded in 2004 by beaches residents, Beaches Watch has been providing 10 years of service to the beaches communities.  On Saturday, September 27, the Beaches Watch 10 Year Anniversary Celebration was held at the Cobalt Moon Water Studio to celebrate this wonderful milestone. 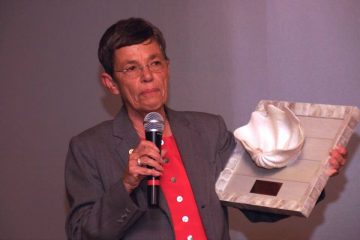 The dictionary defines cultivation as:

to promote or improve the growth of (a plant, crop, etc.) by labor and attention.

to develop or improve by education or training

to devote oneself to (an art, science, etc.).

In the case of Beaches Watch, if you consider the focus of our cultivation has been “the beaches communities”, then the word “cultivation” truly represents what Beaches Watch has been doing for the last 10 years:

Developing or improving the beaches communities by education

Devoting oneself to the beaches communities

And that last definition of cultivation:  “Devoting oneself to the beaches communities” is the reason we are honoring Neptune Beach Mayor Harriet Pruette tonight with the Beaches Watch 10 Year Anniversary Cultivator Award.  I think everyone will agree this is something that Harriet Pruette has been doing for so many years:  devoting herself to the beaches communities.

When you look at the beautiful graphic of the oyster and pearl that Kurtis created for tonight’s event and you consider what it symbolizes, it truly represents what both Beaches Watch and Harriet Pruette have been doing.  In case you don’t know how a pearl is formed, let me tell you a little more about the process.  I actually looked it up and found this great explanation:

A natural pearl begins its life as a foreign object, such as a parasite or piece of shell that accidentally lodges itself in an oyster’s soft inner body where it cannot be expelled. To ease this irritant, the oyster’s body takes defensive action. The oyster begins to secrete a smooth, hard crystalline substance around the irritant in order to protect itself. As long as the irritant remains within its body, the oyster will continue to secrete layer upon layer of the hard crystalline protectant. Over time, the irritant will be completely encased by the silky crystalline coatings. And the result, ultimately, is the lovely and lustrous gem called a pearl.

What a great symbol to associate with our Cultivator Award and our first Cultivator Award recipient.  Think about it:  Harriet is an oyster, taking defensive action when need be, to protect our beaches communities from something irritating.  No doubt about it, that’s Harriet.

Ultimately, thanks to Harriet’s love of our beaches – her caring, nurturing & cultivating – we are all able to enjoy the beautiful result of her hard work, the wonderful quality of life we all love here at our beaches.

So, in honor of Harriet Pruette, we have compiled this video to share with you some of the reasons why Harriet is being honored tonight.

On behalf of Beaches Watch, I am proud and honored to present the Beaches Watch 10 Year Anniversary Cultivator Award to our beaches own Oyster who has worked tirelessly and lovingly to protect our beaches and make our communities a better place to live:  Neptune Beach Mayor Harriet Pruette

THANK YOU TO OUR SPONSORS! 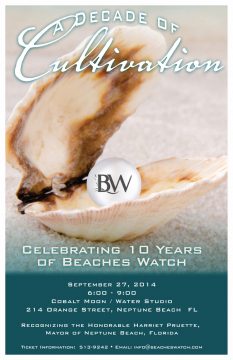