2009 Friend of the Beaches Award 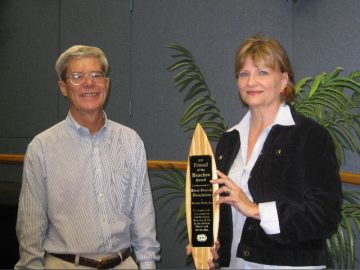 Jacksonville Beach, FL (November 13, 2009) – The River Branch Foundation has been chosen by the Board of Directors of Beaches Watch, Inc. as the recipient of the 2009 Friend of the Beaches Award. The award will be presented at the Beaches Watch monthly meeting on December 2nd at 7pm in the Community Room at the Beaches Branch Library, 600 3rd St., Neptune Beach. The public is invited to attend.

River Branch Foundation was nominated by Warren Anderson, President of the Public Trust Environmental Legal Institute, for its nearly one million-dollar donation to acquire approximately 350 acres of salt marsh property. The property, formerly known at the Buckman-Prichard tract, extends from Tideviews Preserve on the south end to Dutton Island Preserve on the north end. This property is now known as The River Branch Preserve. The preserve connects two marsh-front parks which is part of a 1500 mile paddling trail from the Big Bend coast to the Everglades and Florida Bay wilderness, then proceeding north on the Atlantic side and culminating in Northeast Florida.

In Warren Anderson’s nomination, he stated that “after years of work trying to secure the Buckman-Pritchard tract on the Intracoastal shore of Atlantic Beach as part of the preserved coastline, we believed our efforts were futile since the state funding fell apart. But then the River Branch Foundation stepped up and made a huge donation which allowed us to purchase this beautiful property and complete the pieces to the puzzle on the Intracoastal shore of Atlantic Beach.”

For more than 40 years, the River Branch Foundation has been actively working to improve the quality of life in the northeast Florida area. The foundation’s interests have included social and educational programs for the disadvantaged, especially but not exclusively those which benefit women and children, diverse arts and cultural organizations, and ecology and environmental issues. Over the past ten years, the foundation’s interest in environmental causes has increased, particularly in the area of land acquisition for preservation.

“Beaches Watch is proud to recognize the River Branch Foundation as the 2009 recipient of the Friend of the Beaches Award for its generous contribution that will forever enhance the quality of life of our beach communities”, said Beaches Watch President Sandy Golding. Beaches Watch presents the Friend of the Beaches award to individuals, businesses or organizations that make extraordinary contributions to the quality of life at the beaches. Previous recipients have been Marcy Silkenbaken, Pete Modica, Mary Emerson-Smith, and Bennie Furlong.

Beaches Watch is a non-profit, non-partisan civic organization whose mission is to promote and facilitate educated and productive citizen involvement in local and state government decisions that affect the future of our northeast Florida beaches communities. Beaches Watch achieves this by raising, monitoring and researching issues; providing factual issue information to the general public and government officials; encouraging citizen participation in the solutions to beaches growth and quality of life issues and organizing citizens for action.