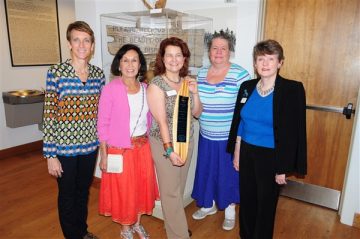 Beaches Watch presents the Friend of the Beaches award to individuals, businesses or organizations that make exemplary contributions to enrich the quality of life at the beaches.  As the 2015 Friend of the Beaches recipient, the Beaches Branch Library was recognized for providing a valuable community resource through their programming, internet access, materials and books, and meeting rooms.  Despite budget cuts and reduced hours of operation, the Beaches Library has been the backbone of the three beach communities as well as the Navy at Mayport.  Even throughout construction and difficulty, the library has been opened and ready to serve the public.  Comic-con and children’s programs have been an inspiration for other libraries and the staff of the library is creative, innovative, and has worked especially hard this year to encourage programing and usage despite the ongoing construction.  And the library has been the gateway to new technology for library patrons.  The Beaches Branch Library Friends group is one of the first in the city and raises money to supplement the library budget and to provide innovative purchases such as a state- of the- art Television and a 3*D printer.

In their nomination, Eileen Krimsky, Ph.D. and John Moreland, Ph.D. nominated the Beaches Branch Library noting that “our library serves the Beaches community in myriad ways, both traditional and modern.  The staff is knowledgeable, and friendly when interacting with the public.  The computers are always in use by a diverse population.  The meeting rooms are frequently used by the community.  In addition to a professional staff, the library is privileged to have a loyal and hardworking group of volunteers who perform visible and unseen services both within and outside the library walls.”

The 2015 Friend of the Beaches award also recognized dedicated volunteers Yvonne and Mike Appell who noticed that the landscaping and trees were not being groomed and began volunteering their time each week to do that job so that the library looks well kept.  Few people even know that they are doing this job.  Terry Welch, library clerk, had this to say about the Appells: “They are long time patrons of the Beaches Library. They consider it to be their own. So much so, that when Mike saw that the leaves were piling up in front of the building, he started coming over on Mondays (when the library is closed) and cleaning them up! Mike and his wife Yvonne have taken numerous bags of leaves home so that they will not be left at the library. “